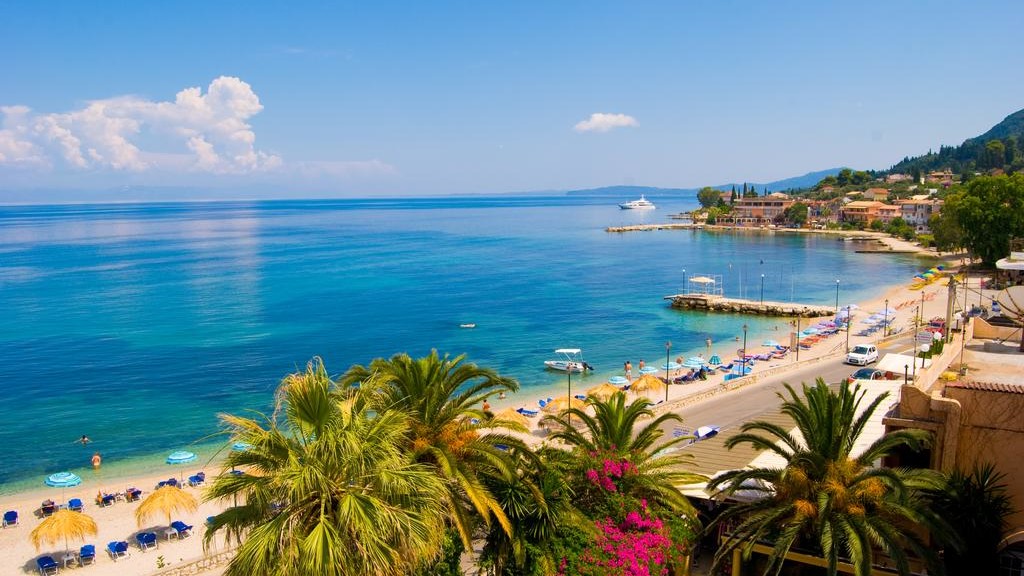 Benitses village is located 12kms south of the main town, on the S.E. coast of the Ionian island of Corfu, just off mainland Greece. The village is 12km’s from the international airport and 14 km's from the main port.

Benitses is the Madonna of the tourist resorts! That is not the Biblical figure, but the singer. As she has transformed herself through her singing career, Benitses has done so through its resort career! It all started when the Romans came to “take” the waters, and even today there are the remains of their “baths” situated in the old village!  Not much later came the backpackers, then followed the families, then for a short while she became another Kavos, full of the young partying all night and now she has come back again as a resort with a little for everyone!

For the children, there is a well-kept playground and a choice of beaches with some shallows, rock pools and small waves. For the teens and young people there are still the bars where it is cool to hang out in your sunglasses in the evening and for them the beach has an array of water sports. For those of us mellower there is a varied selection of restaurants, taverna’s and the beach has pedolos for when we want to act the big kid too!

The newly built harbour has a selection of day-trip boats, which can offer you a variety of excursions including the nearby island of Paxos and Anti-Paxos, the delightful mainland town of Parga, and the famous Blue Lagoon. For the more adventurous there are small motorboats available for private hire, for those of you bringing your own boats on a trailer, there is a slipway built into the harbour. Benitses has, for a long time, been a fishing village for the local people and if you are up and around early you can see them bring in the “catch of the day” to the harbour and watch them set up their stalls to sell to the locals. If you are fond of things from the sea then there is also the Corfu Shell museum located in the village with an array of specimens from all over the world!

For those of you that enjoy walking or cycling then Benitses has a lot to offer. Just outside the village there is a valley criss-crossed by footpaths and leading to the old water works, built in the 1820’s-30’s by the British High Commissioner Sir Frederick Adams to supply fresh water to the main town. There is also a lovely, although steep walk up to the village of Stavros, which then offers incredible views over Benitses and to the mainland. In Benitses itself there are the remains of the Roman thermal Baths [roughly 30 B.C.] On the outskirts of Benitses are the remains of the “Kaiser bridge” built for easy beach access from the famous Achilleion Palace, which itself is only 4 km’s away and is a “must see” on any list. Just 5 km’s away is the boat service to “Mouse” island with its enchanting monastery.

Benitses also has a regular bus service into the amazing cosmopolitan Corfu Town, where you can find museums, churches, fortresses, and shops. Here in town you can fully savour the “cafe-society” in the famous Liston and just relax with an ouzo and “meze” while enjoying the atmosphere.

Benitses is ideally located for whatever you require from your holiday.